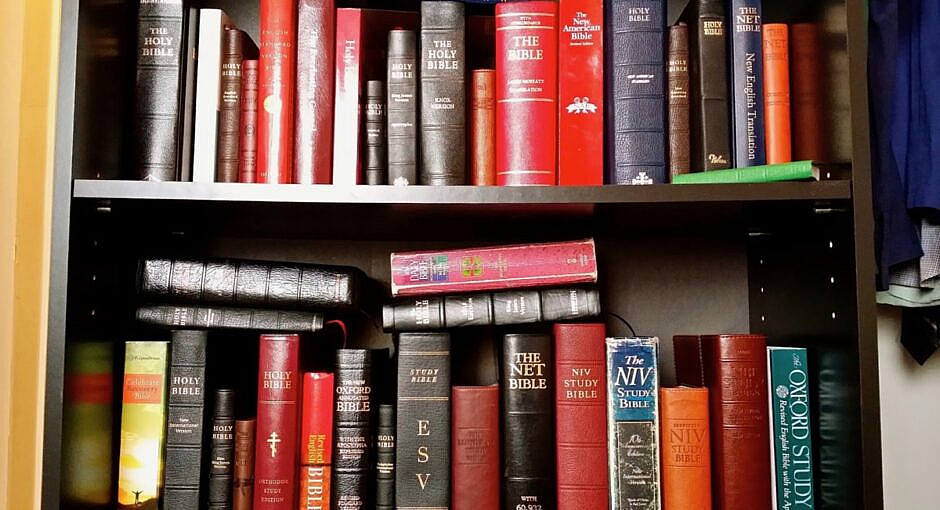 Is There a Perfect Bible? Is the Bible Inerrant?

Today there are hundreds of English Bibles.  The exact number is hard to determine because many Bibles are simply revisions of earlier ones.  That being said, there are approximately 50 English Bible translations if you don’t count the revisions associated with them.

With all these Bibles we have to ask ourselves:

Is there a PERFECT Bible?  Is the Bible Inerrant?

To start, let’s see what the Bible has to say about itself?

1.  The Bible says that it is INSPIRED by God.

All scripture is given by INSPIRATION OF GOD, and is profitable for doctrine, for reproof, for correction, for instruction in righteousness:  That the man of God may be perfect, thoroughly furnished unto all good works.

2.  The Bible says that it comes from the Holy Spirit, NOT from man.

Knowing this first, that NO prophecy of the scripture is of any PRIVATE INTERPRETATION.  For the prophecy came not in old time by the will of man: but holy men of God spake as they were moved by the HOLY GHOST.

Every word of God is PURE: he is a shield unto them that put their trust in him. Add thou not unto his words, lest he reprove thee, and thou be found a liar.

What About Imperfect Man?

But what about imperfect man, even EVIL MEN— couldn’t they intentionally take God’s word and mess it up?  Is God at the mercy of sinful men?

For it pleased the Father that in him (Christ) should all fulness dwell;  And, having made peace through the blood of his cross, by him to RECONCILE ALL THINGS unto himself; by him, I say, whether they be things in earth, or things in heaven.

The story of reconciliation plays out concerning the DESTINY OF MAN.  Men sin, but God reconciles them through Christ.

The story of reconciliation plays out CONCERNING THE BIBLE as well.  Men attempt to destroy it, but God preserves it in history.

Did you know that the PERFECT Bible has been preserved in history?  Which Bible is it?  It’s the King James Bible.  It is the inerrant word of God.

Let me explain why.

ALL Bibles today are based on one of two manuscripts.

Antioch was the first place the disciples were called Christians.

And it came to pass, that a whole year they assembled themselves with the church, and taught much people. And the disciples were CALLED CHRISTIANS FIRST IN ANTIOCH.

All of the manuscripts of the early church fathers ended up in Antioch— both the Old and New Testaments.

The Old Testament had long been canonized.  Jesus referred to it.

And Jesus said unto them, These are the words which I spake unto you, while I was yet with you, that all things must be fulfilled, which were written in the LAW of Moses, and in the PROPHETS, and in the PSALMS, concerning me.

Jesus refers to the Law, Prophets, Psalms.  These three categories make up the WHOLE of the Old Testament.

There were 39 books in all.  They were written in HEBREW.

The Antioch Christians also collected and gathered the letters and books of the New Testament.  There were 27.  They were written in GREEK.

These 66 books make up the Antioch manuscripts.  They were the TRUE WORDS OF GOD.

317 miles to the southwest of Jerusalem was Alexandria, Egypt.

Alexandria was full of scholars and philosophers just like the kind the Apostle Paul encountered many years earlier when he visited Athens (Acts 17:16-18).

These “intellectuals” had a school of philosophy in Alexandria.  Chief intellectual among them was Origen.  Origen had managed to get his hands on a Bible from Antioch.

Origen didn’t like God’s preserved Word as he found it in Antioch.

Origen believed the Bible needed to be interpreted allegorically to reveal its “hidden” meaning.

So, Origen made up his own Greek Bible.

He took the Hebrew manuscript from Antioch, added the Apocrypha (old folk tales) and translated them into Greek.  He called it the “Septuagint”.  Then he added to it his own perverted Greek New Testament.

To dress up the Alexandrian Bible, Origen inserted some New Testament verses into Old Testament passages.  Why?  It had to look like the Apostles and Jesus quoted his Old Testament.  That made his book look “ancient,” and gave it “authority.”

What happened to the Antioch Manuscripts?

The original Greek and Hebrew manuscripts were always available in Antioch through the second century.  They also went to other countries.  For example the Waldensians or the Vaudois (Vahd-WAH) took them to the Alps and preserved them in LATIN.

In 120 A.D. some of the Vaudois became Christians and visited Antioch.  Returning home, they took copies of the Antioch manuscripts and translated them into Latin.  It is known as the Old Latin Vulgate (not to be confused with the later Roman Catholic Latin Vulgate).

Erasmus’ Bible is received by Christians as the TRUE text, because it was based on the Antioch manuscripts.  That’s why a century later (during the translation of the King James Bible) it became known as the “Textus Receptus” or the RECEIVED TEXT!

Erasmus’ Bible inspired Martin Luther.  From it he gained the truth he needed to “protest” the Roman Catholic Church.  He also used Erasmus’ Bible to write his own German Bible.

There were other English Bibles, but in 1611 A.D., the CULMINATION of the English Bible found its place in the King James Bible.

Here are 7 reasons why the King James Bible is the best translation and the inspired word of God.

1.  The New Testament is based on the best Greek manuscript, Textus Receptus.  Unlike other Bibles, there has never been a revision.  Click here, for more information.

2.  King James assembled 54 of the greatest scholars of all time.  They were fluent in Greek, Hebrew and Latin.  Not only that, but they loved God and were true believers.  They were sensitive to the direction of the Holy Spirit when translating.  The King James Bible is almost universally acknowledged as the greatest of all English masterpieces.

4.  It’s the most popular Bible of all time with billions of copies in print.  Scripture verses from it are universally known.  Who doesn’t know:

Yea, though I walk through the valley of the shadow of death, I will fear no evil: for thou art with me; thy rod and thy staff they comfort me?

5.  It has been time-tested for nearly 400 years.  If you accept what it says and obey it, it works!

6.  It was written at a time when the English language was spoken and used in its most perfect form.

7.  The translators decided not to add footnotes and explanatory notes preferring to let the Bible speak for itself.

For the above reason, I would recommend the KJV Common Man’s Reference Bible.  This is a Study Bible but has very modest, yet appropriate notes.  The editor understands and has a great respect for the Antioch manuscripts.  You can find a copy at Pure Words of Truth.

What happened to the Alexandrian Manuscripts?

They are referred to as:

Constantine wanted to use these perverted manuscripts to control the hearts of and minds of pagans in his newly formed Roman Catholic kingdom.

Earlier manuscripts were made of parchment or animal skin.  When one would wear out due to use, another copy would be made from a master manuscript.  If errors were found in these copies they would be tossed out.  However if they were just put aside and not deliberately thrown out, they would obviously last longer due to lack of use.

This is probably the case with the Alexandrian Sinaiticus and Vaticanus manuscripts, as well as certain others, which were discovered in the 19th Century and which were older than any of the still-preserved manuscripts of the Received Text.

These manuscripts contain an amazing number of obvious and careless mistakes. Nevertheless, because of their antiquity, they were accepted by the scholars Westcott, Hort, Nestle and others as the basis for their Greek New Testaments, which were published in the 19th Century and which have in turn served as the basis for all the subsequent modern English translations.

This means that ALL modern translations use the perverted Alexandrian manuscripts as their basis.

To understand the seriousness of these translation errors, click here for a Quick Comparison of Bible Versions.

The King James is Hard to Read

The King James is hard to read and has many archaic words.  Why can’t we make a modern Bible using the “Received Text” as its foundation?

Good question.  However the Bible establishes a PRECEDENT concerning the use of archaic words.

Click here, to learn why we don’t need to create a modern translation when words become archaic. This is also discussed in the video below.

God has always given His word to ONE people, in ONE language, to do ONE job— convert the world.

The supposition that there must be a perfect translation in every language is erroneous and inconsistent with God’s proven practice.

God gave the Old Testament to the world using the Hebrew language.

God gave the New Testament to the world using the Greek language.

The King James Bible— the INSPIRED WORD OF GOD FOR THE WORLD!